Back to Blog
/ Exo Group, LLC 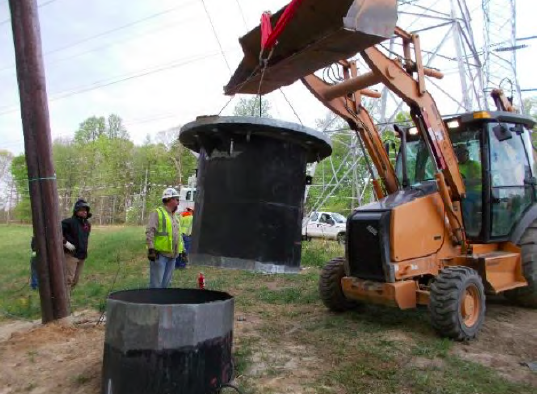 Critical weld repairs and an overall shortening of a foundation caisson are two problems you don't want to have on a transmission line construction project.

Pepco Engineers experienced this situation with its ongoing reliability improvement program, which involves replacing existing 69kV wood pole lines with steel poles. During a caisson installation for one of the projects in the program, the Pepco refusal criterion was met approximately four feet short of the driven depth intended, and the contractor discovered fatigue cracks developing on the full penetration welds and in the base metal of the caisson itself.

In order to avoid serious damage, the engineering company had to address these issues immediately with a clear resolution plan.

After identifying the problem, Pepco Engineers outlined its repair options, which included: 1) evaluating the shorter embedment depth of the installed caisson to determine if it could remain as installed with only weld repairs made to the damaged area, and 2) trimming the caisson to the intended height above the ground, and re-using and re-welding the existing top flange. The company conducted an analysis of the two options and determined both would work, but decided to go with the second approach because it removed the damaged section of the caisson.

From there, Pepco Engineers tapped Exo to evaluate and execute the necessary welding repairs. The Exo team adhered to the appropriate Weld Procedure Specifications (WPSs) to make the repairs, following
a 9-step plan that included:

There were several lessons learned from the Pepco Engineers emergency weld repairs that can be applied to other similar scenarios. For example, the company determined that refusal criteria needs to be evaluated based on total driving time so the caisson does not become fatigued. Additionally, it realized that the original design weld details should be evaluated to enhance fatigue resistance.

By partnering with Exo, Pepco Engineers received inspection and repair services from experienced professionals who were familiar with the necessary codes and standards for the work performed. Exo collaborated with the Pepco team to complete the repairs thoroughly and in a timely manner, so the assets would remain structurally sound.

Get Started with Exo

Ready to Work With Us?

Our team would love to talk to you, so we can learn about your lighting company’s goals and primary areas of concern. Contact us today, and we’ll help you take the first step in creating a comprehensive lighting asset management program. Give us a call at 281-259-7000.